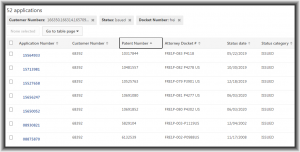 The coders who designed the Patentcenter workbench made a mistake in the “sort by patent number” function.  This is listserv trouble ticket number CP33.The way I encountered this mistake by the Patentcenter coders is that I had hoped to generate a list of the most recent three issued US utility patents that we obtained in our work for a particular foreign patent firm.  This is a search that works correctly in PAIR but it is broken in Patentcenter.

The first step is to log in at Patentcenter and then set up a filter for all “issued” cases for which our docket number “starts with” a particular character string.  (The character string is indicative of the particular foreign patent firm.)

What remains is to click on the “patent number” column heading to sort the workbench by that column.

I clicked once, and the column got sorted so that the topmost patent was from many years ago.  I figured that this meant I had somehow sorted by “ascending” numerical order, from smallest patent number to biggest.  So it was clear the next thing for me to do is to click the column heading again.  This should sort by “descending” numerical order, from biggest patent number to smallest.  What I would then see on the first row is the most recently issued utility patent.  On the second row would be the second-most-recently-issued utility patent.

A competent coder would have any of several approaches available to fix this, depending upon the programming language being used.  In many modern-day languages the elegant approach would be to do the sorting not on the visually rendered patent number but on the output of some function that takes as its input the visually rendered patent number.  The function might be as simple as a regular expression or might be some very simple padding with some “leading zeroes” as needed so that all patent numbers of a particular patent type always have the same number of numerical digits when sorted.