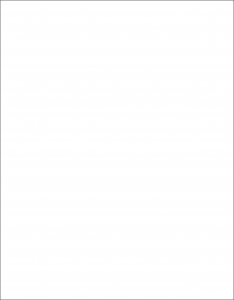 Sorry folks but it’s like trench warfare in World War I to make even micro-progress with getting the Patentcenter developers to fix seemingly simple defects in Patentcenter.

Regular readers of my blog are used to the idea that often I will put an image at the top right of my blog article.  The image is intended to catch your attention and motivate you to click the “continue reading” link to read the rest of the article.  This image shows you the blank page that you might later see to your horror in IFW after you upload a perfectly good PDF file to Patentcenter.

I’ve been engaged in what seems like trench warfare for months now to try to get the Patentcenter developers to fix this.  Today’s blog article provides an actual PDF file that anybody who wishes to, can use to reproduce this issue.

In ePCT, if you upload a file to ePCT that you are getting ready to e-file, the ePCT system will let you preview the file and will let you see what the file would look like after the ePCT carries out whatever conversions or changes it might do to the file.  You as the practitioner can click on the preview and you can see for yourself what would happen if you click “submit”.  And guess what?  ePCT tells the truth.  The preview actually faithfully tells you what would happen.  If it is going to be blurry or unreadable or if it is going to get smooshed in the e-filing process, you will get fair warning by looking at the preview.

When USPTO started alpha-testing the successor to EFS-Web, namely Patentcenter, many of the alpha-testers (including yours truly) pounded the table over and over again and told the Patentcenter developers that it was super important for them to talk to the WIPO people and learn from them how to do a “preview” that would give fair warning.  The impression that the alpha testers got is that there was some sort of “not invented here” problem in the mindset of the USPTO people.  Maybe there was a fear of losing face by having to ask some other patent office for advice.  Maybe there was some institutional distrust of the notion that anybody who works at a patent office other than the USPTO could possibly know better than a USPTO person how to do something.  But for whatever reason, when Patentcenter launched in 2018 in alpha test, its “preview” was just as bad as the EFS-Web “preview” telling you absolutely nothing about the violence that it might cause to the file after you click “submit”.

USPTO then ignored this trouble report even in Ideascale for the rest of July and all of August and most of September.  On September 20, 2020 I was doing continued beta testing of Patentcenter and I e-filed another PDF that got changed into blank pages after I clicked “submit”.  This one happened to be a three-page PDF and so what I eventually saw to my horror in IFW was three blank pages.  So on September 20, 2020 I posted another blog article entitled Dozens of bugs in Patentcenter remain unattended-to.  In that blog article I reported that this conversion to blank pages had happened again and that it was clear that USPTO had not fixed the defect in Patentcenter.

I sent a link to this blog article to quite a few people at the USPTO, including the Commissioner for Patents.

Thank you for providing your observation. We’re unable to reproduce this issue. Please contact the EBC for assistance with specific application questions. Please visit the Patent Center information page for details on known issues and resolutions.

Isn’t that something?  Way back in June, or way back on July 1, they could have just asked which file it was and they could have looked at what I e-filed.  But if they sit on it and wait until today, September 23, 2020 to respond to that trouble report from months earlier, the problem is I can’t even recall exactly which of the dozen things I filed on or around June 8 was the thing that got changed to a blank page.

In my June 8, 2020 blog post I described it in extreme detail, with pixel counts and physical dimensions in inches and millimeters, all the way down to the metadata inside the PDF file.  But no, they’re unable to reproduce this issue.  And anyway, they are going to count this as a closed trouble ticket.  I am invited to contact somebody else, namely the Electronic Business Center, if I need help with a “specific application”.  But no they are not going to fix the problem generally.

So, eMod Moderator, here is a PDF file that you can use to “reproduce this issue”. 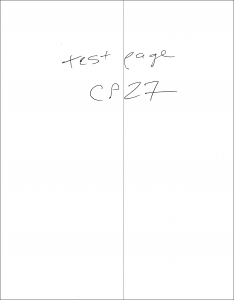 Reproduced at right is a PNG export of the same image just so that you can see generally the content of this image — the handwritten words “test page CP27”.  But the file that we are really talking about is the PDF file linked two sentences earlier.  If you download that PDF and look at its properties, you will see that it says this:

If you calculate a SHA-512 hash of this PDF file that you just downloaded from my blog, you will find that it is:

Then if you feel like doing so, you can click here for a deep link in Patentcenter to one of my firm’s really old patent files:

Look in IFW and you will see an Acknowledgment Receipt dated today, September 23, 2020.  Scroll down and take a look at the SHA-512 hash listed there for a document that I e-filed earlier today:

Yeah.  Guess what.  It is impossible for the USPTO to deny that this is the very PDF that I e-filed in this very case earlier today.

You will note that the ack receipt reproduces this warning:

If this document were to be “resized” to make it 4% bigger (which would be a waste of time, actually), it would still be perfectly readable.

Now you already have this application open in Patentcenter.  Go ahead and click on the other item in IFW that is dated today, September 23, 2020.  You will get … wait for it … a blank sheet of paper.

Any reader of this blog can “reproduce this issue” effortlessly.  Here’s how you do it.  Pick some ancient long-expired provisional patent application in your workbench.  Download this PDF and use Patentcenter to create a submission package in that old application in your workbench.  Preview it so that you can see what it looks like in Patentcenter before you click “submit”.  The words “test page CP27” will appear on your screen.  Then click “submit”.  Then go look in IFW.  You will see that Patentcenter converted it to a blank sheet of paper.  Then just sit back and imagine how in a new case that you are filing today in 2020, a conversion to a blank sheet of paper might cost you a filing date or might cost you your career.

As I say, this is like World War I trench warfare.  I am going to post a link to this blog article as a comment to Ideascale idea number 520.  And we shall see if eMod Moderator is willing to click on the link and read this blog article and maybe do a test filing using the PDF that I have served up here on a silver platter.