We’re all familiar with 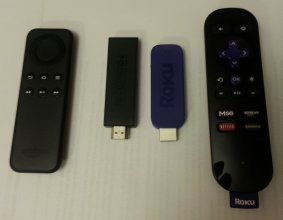 media sticks such as the Amazon Fire TV Stick (left) and the Roku Stick (right) and the Google Chromecast (not shown).  You plug the stick into a spare HDMI port on your television, explain to the stick how to connect to your wifi, and sit back and watch any of a range of “over-the-top” programming.  This “over-the-top” programming, by the way, is going to change everything for those entertainment providers (DirecTV, Dish, Comcast cable TV, Time-Warner cable TV) that traditionally made big profits by forcing you to buy expensive bundles of channels just to get the one or two channels that you actually wanted.  But the new world of “over-the-top” programming will be the subject of a later posting.  For now, the important thing is that one of these media sticks just got better, and is now the ideal media stick for the road warrior who wants to watch the occasional movie-on-demand or television-episode-on-demand while on the road in a hotel.

The big problem, until today, with all of these media sticks was that they won’t work worth a darn in a hotel.  The hotel wifi nearly always has a “terms and conditions” screen that you must view and click on to gain access to the hotel’s wifi.  Or requires that you enter your room number and name as part of gaining access.  And the media sticks lacked any way to do this.

The media sticks are programmed to update themselves with the maker’s latest firmware.  And today’s firmware update for one of these media sticks gave it the ability to connect in a hotel.  Which media stick, you might wonder, am I talking about?

The media stick that just got better is the Amazon Fire TV Stick.  As of today, its firmware lets you connect in a hotel.  When you pick a wifi network to connect to, the Amazon Fire TV Stick tests the network to see if it can reach points outside of the hotel.  If not, the stick launches a rudimentary web browser.  The web browser lets you satisfy the hotel’s requirements — accepting terms and conditions, entering your room number, etc.  Then the web browser closes and you can proceed to watch your streaming program.  An on-demand episode of Game of Thrones through your HBO Go app.  An on-demand episode of Marco Polo through your Netflix app.   Or a free on-demand Amazon Prime movie.

To get this benefit, you need only to tuck a media stick and its associated remote control into a corner of your suitcase.  Easy, handy, smart.