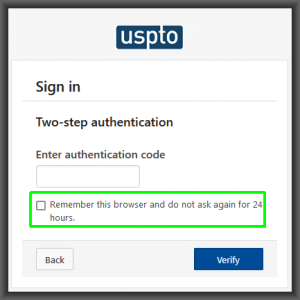 It can be very difficult to log in at Patentcenter, which is the system that USPTO intends will replace Private PAIR and EFS-Web.  Given that USPTO plans to shut down both Private PAIR and EFS-Web in the near future, what follows from this is that the USPTO needs to fix the many design flaws and software bugs in Patentcenter.  Many of the flaws and bugs in Patentcenter have been outstanding since its alpha-test launch more than two years ago, and have not been fixed even after more than two years.  Today’s blog article talks about a trick that often helps with the login defects in Patentcenter.

One area in Patentcenter that is particularly vexing is the simple step of logging in.  It is commonplace for a user to click the “log in” link in the upper right corner of the screen, entering a user ID and a password, and then apparently finishing the login process, only to find that the user’s status continues to be “not logged in”.  With a successful login, what should happen is that the “log in” link goes away and is replaced by the user’s name.  Instead, after following all of the log-in steps, the user sees that the user is still not logged in and the “log in” link continues to be prominent in the upper right corner of the screen.

If you phone up the EBC to ask for help with this problem, you are likely to be told “try a different browser” or “clear your browser cache and try again”.  Such suggestions point directly at mistakes made by the programmers who designed this aspect of Patentcenter.  People who have done a lot of computer programming realize that when a user is told to try things like this, it does not mean that the user was doing something wrong.  What it means is that the system designer was doing something wrong.  It means that the system designer has failed to test the system well enough on the commonly used browsers.

Many users of Patentcenter belong to the Patentcenter listserv, which is an email discussion group for users of Patentcenter.  (If you realize that USPTO’s planned shutdown of Private PAIR and EFS-Web might be disruptive to your work, you should probably join that listserv.)  Given the lack of meaningful responsiveness from the USPTO developers on this problem, Listserv members have been reduced to exchanging anecdotes and random experiences with things that might help in the login process.  Perversely, what has become clear to users is that the “remember this browser” check-box (see screen shot above) which is surely intended to make it easier and faster to log in next time, often actually guarantees that the user will be unable to log in next time.  So some users have gotten into the habit of never checking that box.  This has the drawback that every time you find that you have to log in, you will have to go through the two-factor authentication step.  (This defect was reported to the USPTO developers in November of 2020 as CP48 at the trouble ticket web site.)

The EBC advice of “trying a different browser” and “see if it helps to clear your browser cache” is, unfortunately, not very helpful and clearing one’s browser cache often is no help at all.  What members of the Patentcenter listserv have found is that if you clear all of your cookies that are tied to “uspto.gov”, the problem usually does go away and the user is able to log in directly at Patentcenter when it was previously impossible to do so.  (The more important thing that this tells you is that the USPTO developers have made some very serious design mistakes in Patentcenter.)

Of course what one would prefer is to not have to go through the two-factor authentication step any more frequently than is absolutely necessary.

This blog article describes a workaround to the login process that (in my own experience, at least) works pretty well in side-stepping the login defects in Patentcenter.  When you are (unsuccessfully) trying to login at Patentcenter (see screen shot at right), there is the “log in” link in the upper right corner, as I mentioned earlier.  Clicking on that link to try to log in at Patentcenter is very often a fool’s game. 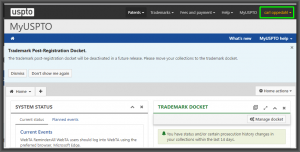 The workaround is to click on “MyUSPTO” and log in at MyUSPTO rather than trying to log in at Patentcenter.   You can see a successful login in the screen shot at right.  The way that you know you succeeded is that you can see your own name in orange at the upper right corner.  For this login at MyUSPTO, the “remember me” checkbox is apparently a feature instead of a bug. 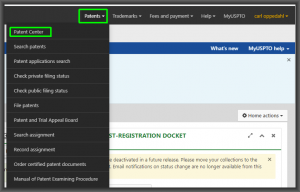 Once you see that MyUSPTO has granted logged-in status to you, then click on “patents” and “Patentcenter” as shown in this screen shot.  What I find when I do this is that the “logged in” status in MyUSPTO somehow carries over into Patentcenter.

Anybody who has done any web design with cookies and other authentication techniques can tell you that what this proves is that the USPTO developers made big mistakes in the coding of Patentcenter.  Of course USPTO needs to get this fixed.  It should not be necessary to go and log in at some other part of the USPTO web site that is not Patentcenter, as a backdoor way of logging in at Patentcenter.

« Over 900,000 pending US trademark applications!
USPTO gets it right sometimes — disclosures from parent case »

5 thoughts on “How to overcome the login defects in Patentcenter”