In our office we have two wifi networks — a secure network that is available only for employee use, and a public network for visitors.  (Actually it’s three wifi networks — a 5-GHz secure network, 2.4-GHz secure network, and a 2.4-GHz guest network.)  When a visitor arrives, the usual first step is to get their smart phone or tablet or notebook computer connected to the guest network.  The old-fashioned way is, of course, to give the visitor a piece of paper with the system ID and password, and they hand-key this information into their device.

But there are nice new ways to do this.  A first nice way is with a QR code.  We generated a QR code containing the system ID and password, and we keep copies of the QR code handy in our conference room.  The visitor uses their smart phone or tablet camera to read the QR code and it connects them automatically to the guest wifi network.

A second nice way is with an NFC tag.  We have an NFC tag in our conference room, programmed with the system ID and password.  The visitor simply taps the smart phone on the tag, and it connects them automatically to the guest wifi network.

To do this, the visitor’s smart phone must of course have the

ability to read NFC tags.  Most smart phones these days have this capability.  To get the NFC function to work, you typically need to turn it on if it is not already turned on.  When NFC is turned on, you will see this logo on the screen.  Many smart phones don’t actually ha

Here’s the place where I feel sorry for people who use Apple iPhones.  It turns out that although iPhones have NFC circuitry, Apple has locked the circuitry so that the only thing you can do with it is Apple Pay.  An iPhone owner can’t read NFC tags like the one in our conference room.  In contrast, nearly all current phones running Android or Windows Mobile not only have NFC circuitry but also make it available for multiple uses including Google Wallet and the NFC tag in our conference room. 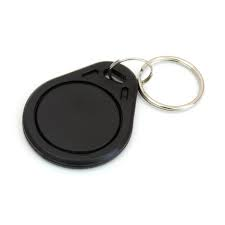 If you are shopping for a new smart phone, make sure it has NFC circuitry and can read NFC tags.  It’s the wave of the future.