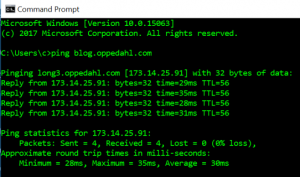 We are all accustomed to using “ping” as a way to test Internet connectivity and to measure the latency of an Internet connection. This post talks about a similar function for telephones, a function that can be very helpful in testing the configuration of a VOIP (voice over IP) telephone.

In the test illustrated above, I “pinged” the server for this blog.  My computer sent a “ping” packet to the server, and the server sent back a “ping” response.

A first thing that the results indicate is that at the time of the test, I had Internet connectivity to the server.  I know this because each of the four packets that I sent resulted in receipt of a responsive packet (zero percent packet loss).

In the world of SIP telephony (the protocol generally used nowadays for VOIP) it can sometimes be a bit of a challenge to configure a SIP telephone so that it is able to work well with a VOIP PBX.  It is one thing to configure SIP phones in the controlled environment of a LAN (local area network) within a single building.  It is quite another thing to configure a SIP phone to work at a more remote location such as an employee’s home or a hotel room.  In a remote location, the LAN is always “behind a NAT”, meaning that the local area network is connected to the Internet through a router that uses NAT (network address translation).  If I am trying to set up a SIP phone in, say, a hotel room, I do not get to control anything about the router that the hotel uses to serve the hotel guests.  Routers use any of a variety of variants of NAT and the SIP phone configuration that might work with one variant of NAT might not work with a different variant of NAT.  The configuration that works in one hotel might not work in another hotel.

The typical failure mode if the user has bad luck configuring a SIP phone to work in a new location is that during a telephone call, the user can hear but cannot be heard, or vice versa.  This means that one of the first things the user might do, when setting up the SIP phone for the new location and when testing the phone, might be to place a telephone call to someone and to ask “can you hear me now?”

Wouldn’t it be nice if there were an easy way to do the equivalent of a “ping” for telephones?  Well, there is.  At Oppedahl Patent Law Firm LLC we have set up a simple server that does just that.  Here’s how it works.

Call +1-720-230-1331.  (Yes, I encourage you to call that number right now!)  The call will be answered by our server.  An automated attendant will explain that you can press “4” for an echo test.  After you press “4”, you can speak into your telephone.  The server will echo your own words back to you.

So suppose you are configuring a SIP phone for an employee to use at home, or at a hotel room.  This permits you to confirm that you can hear and be heard, in an automated way.  You would not need to disturb a human being by calling them on the phone.  This permits you to confirm that your SIP settings are working well with the router (or routers) that serve the home or hotel.

When I called it just now and spoke the word “test”, the echoed word “test” arrived about half way through my spoken word “test”.  I estimate the delay was about 100 milliseconds, maybe at little less.

In the world of SIP there are several different ways that a particular SIP telephone can be configured in terms of the way that it sends DTMF (touch-tone) tones to a called destination.  Depending upon the particular situation, one of the ways to send DTMF tones might work better than another.

You might wish that you could test to make sure that your SIP telephone is sending DTMF tones successfully.  I am pleased to be able to report that our server will also let you test the DTMF configuration of your SIP phone.  Dial that same telephone number +1-720-230-1331 and follow the prompt to press “5” for a DTMF test.  You will then be able to press a number key on your telephone and the server will read the number back to you.  For example you could press “7” and the server will say “seven” back to you.  In this way you can confirm that your SIP telephone is sending DTMF tones successfully.

4 Replies to ““Ping” for telephones”