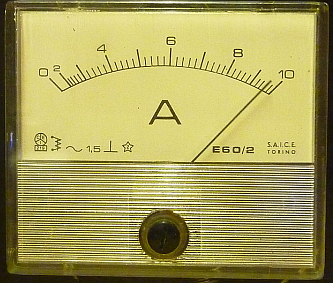 was flowing in a circuit was by looking at a needle in a d’Arsonval meter.  With the meter at right, with the needle as shown you could fairly confidently say the current is 9.6 amperes.  But with this kind of meter if the current got too big, the needle would bump against a “peg”.  We would say “the meter is pegged” as a shorthand way of saying “the current is so big that it exceeds the range of the meter”.  With the meter at right if the needle were at “10”, a person who did not know how mechanical meters worked might mistakenly conclude that the current was in fact 10 amperes.  The real situation was that there was a “peg” to keep the needle from swinging further to the right.  If the needle happens to be at “10”, the true value might be 12 amps or 20 amps or more.

Which brings us to the point of today’s blog posting.  USPTO publishes statistics as to the backlogs for particular art units.  In Private PAIR, you can see the backlog for a specific one of your pending files, communicated as a “First Office Action Predication” based upon when your application was filed and which art unit you are in.  The FOAP tells you how many months from now that particular application is likely to receive its first Office Action.  USPTO also publishes general statistics for each art unit.  Recently I wrote about backlogs in the design art units.  Now I am going to say a few words about the utility art units with the biggest backlogs including the art units that are “pegged”.

I downloaded USPTO’s published statistics for backlogs across all art units, and sorted them from best to worst.  I then picked out the worst seventeen and here they are.

Now let’s immediately dispel a few possible wrong impressions about what it means to be “worst”.  To say that, for example, art unit 2173 is tied with four other art units for having a backlog of 58 months is not to say that this art unit has bad examiners or that the SPE is not doing his or her job well.  The biggest single factor that explains this art unit’s position in the list is simply the number of applicants who chose to file patent applications that eventually got classified into patent classes and subclasses that are connected with this art unit.  Another factor could be loss of examiners in the art unit, for example if an examiner in 2173 gets promoted to a different job somewhere else in the USPTO, or retires from government service.

Now let’s get to what it means to be “pegged”.  It turns out that USPTO’s “backlog meter” has a peg at 60.  No matter how bad the backlog is for a particular art unit, the meter never shows a number bigger than 60.

Some years ago the peg was set higher.  In those days the biggest number you would ever see is 108.  But more recently the USPTO reset the peg at 60.

One thing that this means is that we cannot really say that, for example, art unit 3685 is tied with ten other art units for last place at 60 months.  The reality is that probably none of the art units listed with a backlog of 60 months actually has that amount of backlog.  The true number for a given art unit might be 61 or 71 or 81 months.  From the published statistics, we can’t really know which art unit has the biggest backlog.

Oh and 3992?  I’d guess this must be the place where reissue and reexamination applications go.  I’d be grateful if someone who knows can confirm this.

Given that under USPTO rules all reissue and reexam applications are automatically “special”, it is a bit of a puzzler how an art unit handling such applications could possibly be pegged at 60 months.

Stay tuned for my next post in which I identify the art units with the smallest backlogs.  Oh and if you haven’t already subscribed to this blog, I invite you to do so in the signup box at the upper right.  And if you like this blog, tell your friends!

6 Replies to ““Pegged”, or, which utility art units have biggest backlogs?”