This observed drop is consistent with some slides that the USPTO trademark management presented to the Trademark Public Advisory Committee last Friday, as I will now discuss. 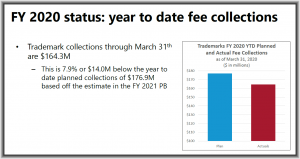 Last Friday there was a meeting of the TPAC, and these slides were presented.  This is from slide 25.  It says that trademark-related fee collections for fiscal year 2020 are down 7.9%.  Keep in mind that the fiscal year began October 1, 2019, so the red bar in the chart is a blend of healthy economy for the closing three months of calendar 2019 together with the first few months of 2020. 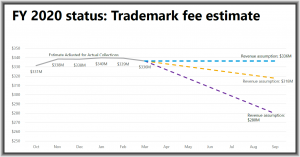 This puts USPTO trademark management in the unenviable position of trying to guess what might happen in coming months.  Here is slide 26.

Looking at the graph, a person can sort of guess where the $318 million came from.  Maybe what happened is someone took the revenue drop from February 1 to March 1 and assumed that the slope would remain constant for the remaining six months of the fiscal year.  And a person can guess that the source of the $336 million was that someone took the projected entire-year revenue based on what had happened by March 1, and assumed things would not worsen for the remaining six months of the fiscal year.  But the $280 million number?  As I say as far as one can tell from this slide, the number was picked out of the air.  And then somebody simply drew a straight line from the last-known actual number down to the place where you hit the number that was pulled out of the air, namely $280 million.

The other thing that I hope the members of the TPAC were alert enough to realize was that the person preparing these two charts did the usual tricky thing that people do when they are being tricky when they are preparing charts — they did not start the Y axis at zero.  In the bar chart with the blue bar and the red bar, the Y axis starts at $100 million.  This makes the visual impact of the revenue drop, as portrayed in the bar chart, more than double its actual mathematical impact.

The line graph does this in an even more extreme way, starting the Y axis at a quarter of a billion dollars.  This makes the visual impact of the violet line widely out of proportion to actuality.  The TPAC committee member who sees this slide flash past in a few seconds might be forgiven for taking away that the Trademark Office was worried about maybe losing more than half of its revenue stream by the end of FY 2020, when the true impact being worried about was far, far smaller than that.

« How many design applications have been filed in Patentcenter?
Trademark Office commits to really masking owner email addresses »