Relax, folks, the Trademark Office had a “comprehensive strategy” to detect and block those questionable trademark filings all along.

On August 11, 2021 the Inspector General of the Department of Commerce published a report entitled USPTO Should Improve Controls over Examination of Trademark Filings to Enhance the Integrity of the Trademark Register saying the Trademark Office has been letting far too many questionable trademark filings slip through.

the examination process does not always efficiently lend itself to discovering wider patterns of fraud and improper behavior that often taint many applications at a time.

True.  One Examining Attorney, working on a single application, could not be expected to somehow drill down to figure out that in the US Postal Service database there is a lookup field that serves as a telltale that the applicant’s address is a Commercial Mail Receiving Agency.  This is the database field that instantly reveals if the applicant is using a UPS Store, or is using the street address of a US Post Office instead of coming out and saying that the mailing address that the applicant provided is a post office box.

The Director goes on to say:

Because multiple applications are often filed by a single entity using the same data elements but owned by multiple applicants, it is by tracking those common data points through our IT systems that we identify and fight back against these schemes. To achieve this result on the scale we need, in 2019 we created – and are now expanding – a special task force of attorneys, analysts, cyber investigators and IT personnel to investigate submissions that we suspect are violating U.S. rules of practice, representation rules, or USPTO’s terms-of-use.

But despite my numerous reminders to the Trademark Office, the Special Task Force continued to fail to use the CMRA field to smoke out applicants who were using non-domicile mailing addresses.

I published a series of blog articles that I imagined would sooner or later embarrass the Trademark Office into action.

Nope.  Nobody at the Trademark Office used this super-easy way of smoking out non-domicile mailing addresses.  It’s the sort of thing that one or two competent computer programmers could code on a weekend, if given some pizza and soft drinks, and after finishing and testing the code, the programmers would have part of Saturday and all of Sunday left over.  But no, the Trademark Office continued to snooze through this. 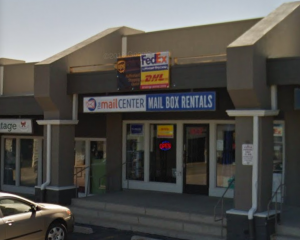 I got really tired of this, because one of my pending trademark applications was colliding with a filing that looked a bit sketchy to me, that had been filed at a storefront mailing center in Colorado Springs, at a street address of 6547 North Academy Boulevard.

I will point out that anybody sitting at home in their pajamas could have done exactly the same TESS search that I did next:

If you do this search, you will find no fewer than 2300 live US trademark applications for which the applicant has listed this Mail Center as its address.  Oh and as far as I can see no two of the applications have the same applicant.  But, this is interesting, at least 2000 of them have the same attorney.  Spot-checking, most of the marks are unpronounceable combinations of eight or so letters.

So I did four things with this list of 2300 live US trademark applications.

I then sat back and watched.

And wouldn’t you know it?  As of today, August 18, 2021, the Trademark Office has mailed out more than three hundred office actions in which an Examining Attorney points out that the address is a CMRA and says the applicant has to reveal where the applicant sleeps at night.

Most of the three hundred Office Actions predate the Inspector General’s report.

« Another development in “where you sleep at night”
Is it important to record assignments in divisional and continuation cases? »

One thought on “Yes, the Trademark Office had a “comprehensive strategy” all along”