Today, January 31, is the last day to get your numbers in.

How many responses do we have so far?

Every year, some firm misses out by failing to get its numbers in by the closing date.  Don’t be that firm!  Get your numbers in before closing day which is today, January 31.  Click here for the: 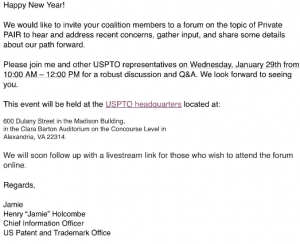 (Update on March 1, 2020:  A month has passed and I have still heard nothing back from Mr. Holcombe’s office in response to my telephone and email inquiries.)

Today I learned that yesterday the USPTO’s Chief Information Office, Mr. Henry Holcombe, hosted a forum on the topic of Private PAIR.  I don’t know how Mr. Holcombe chose his guest list.  But what astonishes me is that no invitation was extended to the PAIR listserv.

The PAIR listserv is a community of over four hundred patent practitioners who make daily use of the PAIR system. My guess is that many or most of the “coalition members” who got invited to this forum are companies that make money by scraping data from USPTO systems, not by paying money to the USPTO.  In contrast, the members of the PAIR listserv are paying customers of the USPTO, who collectively pay tens of millions of dollars to the USPTO annually.

Mr. Holcombe’s stated goal of addressing recent concerns, gathering input, and sharing some details about his path forward would have been well served by reaching out to the PAIR listserv.

I contacted Mr. Holcombe’s office about this but have not gotten any response.

For more than three years now, there has been an urgent need for USPTO to fix a problem with its FFL rules, 37 CFR § 5.11 et seq.  See my blog article USPTO needs to update its Foreign Filing License rule (October 29, 2016).  After three years of being repeatedly reminded of this, USPTO has done the right thing and has published a proposed revision to its FFL rules.  You can read about it here:

Facilitating the Use of WIPO’s ePCT System To Prepare International Applications for Filing With the United States Receiving Office, 85 FR 5362, January 30, 2020.

Comments are due by March 30.  Twenty-one patent practitioners filed this comment.

A week ago I blogged that we migrated our OPLF speed test from our office in Colorado to a server farm in Arizona.  At that moment our speed test was on a box that was connected to the rest of the world through 100base-T ethernet.  That meant that the fastest speed you would ever see in the speed test is 100 Mbps.  If your own Internet connection happened to be faster than 100 Mbps, then our speedtest would give you an unnecessarily pessimistic sense of the speed of your Internet connection.  Just now we took a step that removes this unnecessary pessimism.  END_OF_DOCUMENT_TOKEN_TO_BE_REPLACED

(Update:  A letter got sent on February 22, 2020 to the Commissioner for Patents at the USPTO, asking the USPTO to pull the plug on DAS.  See blog post.)

The key thing here is that if our US case had claimed priority from almost any other Office than EPO, we would have been told in an automatic way, by email, that the successful retrieval had taken place.  But no such automatic email arrived for this EP priority application.   Why is this bad situation the way it is?  END_OF_DOCUMENT_TOKEN_TO_BE_REPLACED

The closing date for getting in your numbers will be Friday, January 31, 2020.

How many responses do we have so far?

Every year, some firm misses out by failing to get its numbers in by the closing date.  Don’t be that firm!  Get your numbers in before closing day which is January 31.  Click here for the:

(Thanks to the many commenters who gently pointed out that we are now in the year 2020!  It is not a fake date at all.)

END_OF_DOCUMENT_TOKEN_TO_BE_REPLACED

But now a second Office has joined this high status.  The Norwegian Industrial Property Office now stands as a second Office that participates in DAS in every way that it is possible to participate. END_OF_DOCUMENT_TOKEN_TO_BE_REPLACED