For some years now I have seen fitness bands on the wrists of friends of colleagues.  By far what I have seen most frequently is the Fitbit.  The Fitbit lists for $100 b

ut if you shop around you can get it for as little as $78.  What does it do?  It does exactly one thing.  It measures accelerations in all directions.  It thus serves as a step counter and it tries to figure out when you are asleep so that it can tell you how many hours of sleep you got last night.  When it’s brand new its rechargeable battery lasts five days.

What if I were to tell you that a big company that you have never heard of makes a fitness band that does everything that the Fitbit does, only better, and also measures your heart rate, and only costs $20?   Oh and the battery life between charges is three or four weeks.

The product is the Mi Band 1S, made by a company called Xiaomi.  This company has sold millions of Mi Bands, mostly to consumers in Asia.  Slowly, very slowly, its products are finding their way to the US.

Most fitness bands that purport to tell you how much sleep you got, or how good your sleep was, do it solely by “actigraphy”, namely solely by means of accelerometer readings.  I can certainly think of times that I have been motionless in bed, or nearly so, but not at all asleep.  Accelerometer readings, alone, probably do not give a complete picture of one’s sleep situation.

The Mi Band 1S uses actigraphy, but in addition uses an optical sensor on the inside 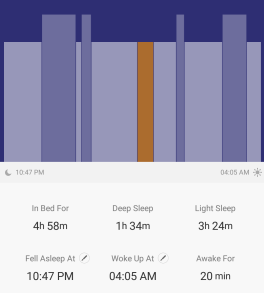 surface of the band to measure your heart rate.  This permits the band to make better guesses as to which periods of motionlessness are deep sleep, which are light sleep, and which are not sleep at all.  Here is an actual report from a Mi Band 1S.  This person fell asleep at 10:47 PM, woke up at 4:05 AM, and during that time had 1½ hours of deep sleep, denoted with dark blue in the report.  The orange bar shows a period of wakefulness.  You can touch a bar to zoom in on details.  Touching the orange bar reveals that the period of wakefulness began at 1:32 AM and ended at 1:52 AM.  Touching the light blue area just to the right of the orange bar reveals that a period of light sleep began at 1:52 AM and transitioned to deep sleep at 2:20 AM.

Turning to battery life.  The Fitbit users I know tend to pull the Fitbit out of its elastic band nearly every night so that it can be plugged in to recharge the

battery.  Note that if the user is not wearing the Fitbit, the Fitbit is unable to measure the user’s sleep!  Here you can see a battery status display for a Mi Band 1S.  This particular device was last charged 29 days ago, and one-eighth of the battery life remains.

The Mi Band 1S band can, if you like, make more use of the vibration feature than most bands do.  If you have misplaced the Mi Band 1S, you can touch a button in your smart phone app to make it vibrate to help you find it.  You can link various functions of your smart phone to the band.  I have mine set up to vibrate when there is an incoming phone call.  This means that even if my phone is down the hall in another room, where I can’t hear the ringer, I will know that I have an incoming call.  I also have mine set up to let me know when a Wechat message has come in.  I also have it set up so that when my Google calendar beeps to tell me of an upcoming appointment, the Mi Band 1S will vibrate as well.  On more than one occasion the only thing saving me from missing an important conference call has been the Mi Band 1S.

All fitness bands can be programmed with one-time and recurring vibrating alarms.  One nice thing about this is that the band could wake you up each morning to go to work, without disturbing anyone else!  But the Mi Band 1S goes one better.  Yes you could program it to wake you up at a specified time, just as with any other fitness band.  But rather cleverly you can configure it, if you wish, so that if it notices you have transitioned from deep sleep to light sleep, and if less than 30 minutes remain before your requested alarm time, it will wake you up early.  In this way you get awakened during light sleep when it is easier to wake up.

I’m frankly astonished that the Mi Band 1S offers all of these features at a fraction of the price of other fitness bands.