Recently I blogged with a recommendation that readers migrate their $40 or $55 per month landlines to VOIP lines that cost as little as 85¢ per month.  In response, alert reader and Portuguese and European patent attorney Luís Ferreira asked:

What about security? SIP communications are not normally encrypted?

His questions are good questions.  Here are a few partial answers. 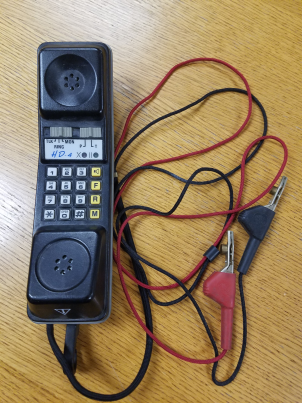 Now let’s talk about SIP (which stands for “Session Initiation Protocol”).  Several things happen when a SIP call takes place.  First, the “call setup” happens.  These are things like somebody dialing a phone number and the system figuring out whether the called number is busy, and making the phone ring, and detecting if the callee has picked up the handset, and so on.  This is all done by means of SIP messages, typically on UDP port 5060 or TCP port 5061.  Likewise when a phone call reaches its end, typically with somebody hanging up a phone handset, the voice path needs to be “torn down” and this is also done by means of SIP messages.

Either or both of these kinds of data message (SIP on the one hand, and RTP on the other hand) has the potential to be eavesdropped upon.

As for the SIP messages (used for setting up and tearing down talk paths), there are three choices for the kind of data packets being used — UDP, TCP, and TLS.  The third choice, TLS, uses encryption.  If TLS is employed, this makes it very hard for an eavesdropper to make any use of the intercepted SIP data packets.

As for the RTP packets, there are two choices — RTP and SRTP.  The latter uses enc 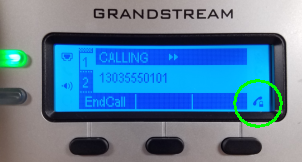 ryption.  SRTP makes it very hard for an eavesdropper to make any use of the intecepted RTP packets.

When we set up our new Grandstream PBX recently, we configured it to use TLS and SRTP wherever possible.  You can see at right a little “lock” icon on the display screen of one of our telephone extensions, which indicates that the telephone call that is taking place is protected by SRTP.

As I mentioned above, a typical SIP telephone call has two segments — a first segment from the VOIP server provider to our PBX, and a second segment from our PBX to the end-user’s telephone extension.  As for the second segment, we control both ends of the segment because we own the PBX and we own the extension telephones.  So we are able to force it that this segment is encrypted both as to SIP packets and as to RTP packets.

What I have found is that most VOIP service providers do not support TLS or SRTP.  It means that a dedicated eavesdropper, if making use of sufficiently sophisticated equipment, could intercept packets between our office and the VOIP service provider, and could reconstruct the telephone calls.

Of course what would be desirable is if more VOIP service providers were to support TLS and SRTP.  Between now and when that happens, the calls could be eavesdropped upon at points between our office and the facilities of the VOIP service provider, although not nearly so easily as eavesdropping upon legacy landline telephone calls.

3 thoughts on “What about the security of SIP (VOIP) communications?”