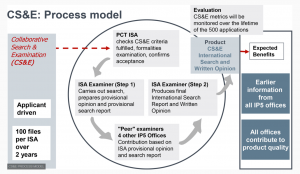 Imagine you are counsel representing a patent owner in an infringement case.  Suppose you can say to the judge and jury:

Ladies and gentlemen, you have heard my learned opponent invite you to consider whether perhaps this patent should never have been granted because of prior art that was overlooked.  But you might be interested to know that during the time that this patent application was pending, prior art searching was carried out by not one, not two, not three, not four, but five patent offices.  The Examiners in these five patent offices were fluent in the Chinese, English, French, German, Japanese and Korean languages.  Before the claims were found to be patentable, these Examiners shared with each other the prior art that they found.  The Examiners from these five patent offices shared their thoughts as to whether the claims were patentable in view of the prior art that was found.  Only after all of these things took place did the patent office decide to grant a patent.  And this is the patent before you now.

During this pilot project, the cost to participate is zero.  Yes, it sounds too good to be true, but it is zero.  You need only pay the same fees that you would have paid ordinarily.  The search fee, for example, will simply be the search fee that you would normally pay for the ISA that you select.

What’s the catch?  There isn’t a catch.

Well, there are several small catches.

First, the CS&E pilot will run for at most two years. Maybe later there will be an ongoing (maybe even permanent) CS&E program, but for now there will only be this pilot program.

Second, during those two years, no single applicant will be permitted to get more than ten applications into the CS&E pilot.

Third, each of the five ISAs plans to accept at most one hundred PCT applications into the CS&E pilot.  From this it follows that each ISA will find itself participating as a peer ISA only four hundred times.  Saying this differently, the total number of PCT applications accepted into this pilot will be at most about five hundred.

The number of granted patents from this program in any particular patent office might turn out to be several hundred.  Considering that some cases might turn out not to be patentable, and considering that divisionals might get filed, I can imagine the number of granted patents from the CS&E pilot might be in the range of 300 to 600.

If you’d like to try to get one of these several hundred Super Patents, you will need to act fast.

To learn more about the CS&E pilot, click on the WIPO web page about CS&E or on any of the following links:

6 thoughts on “Getting a Super Patent”