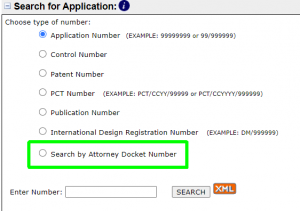 One of the first questions that comes up any time any PAIR user tries to use Patentcenter for the first time is, how do you do a search by attorney docket number?

One of USPTO’s stated design goals for Patentcenter, from the outset, was that Patentcenter is supposed to replicate and enhance all of the functions and features of both EFS-Web and PAIR.

For most PAIR users, by far the single most frequently used function is “search by attorney docket number”.  The moment that you log into PAIR, you see this function prominently in front of you.  You do not have to hunt for it.  The search itself requires only two mouse clicks, with no hunting or scrolling or required knowledge of Easter egg (hidden) locations in the user interface.  See for example this Ideascale posting where a Patentcenter user writes:

[It’s] no longer possible to search by docket number. This was useful, for example, when the system did not immediately find via application number.

As I say, this is by far the most frequently used single function in PAIR for most users.  So one assumes the Patentcenter designers would (a) provide the same function, or better, and (b) make it just as easy to find, or easier to find.

When such a PAIR user tries to use Patentcenter for the first time, they literally cannot find it.  And the user cannot be blamed.  As it turns out, there is a “filter” function that can be cobbled together as a near substitute for this “search” function.  I will explain how to do it.

I will also mention that alpha testers of Patentcenter pointed out this problem in autumn of 2018 in USPTO’s Ideascale.  It fell on deaf ears.  Even now in 2020, the USPTO Patentcenter developers stubbornly insist that they feel they have in fact provided the same “search by attorney docket number” feature and that nothing about it needs changing or fixing. At the end of the blog article I will ask you whether you think they are right about that.

Here is how to do “search by attorney docket number” in Patentcenter.

By way of review, with PAIR it is a click of a first radio button “search by attorney docket number” and then a click of a second radio button “starts with”.  And then you type in the first few characters of your docket number.  And then since what you want to do is search, it is user-friendly that on the screen there is a button labeled “search”.  And all the clicks are nearby to each other.  The process starts on a page that you can see right away the first moment that you arrive at PAIR.  No mousing around required.  You don’t have to hunt for any Easter eggs.  (See blog article explaining what is an Easter egg.)  Depending on how you count it, the hunting and clicking count is about two or three hunts and clicks.

But no, unfortunately, the Patentcenter developers failed to implement this function in Patentcenter.

Now look around the left column of the screen.  It turns out that what you have to do next is click on the “Ex” button to get rid of the letters “Ex”.  Almost certainly you do not want “Ex” which means “Exact match”.  So you will have to trigger the drop-down and then pick “starts with” or maybe “contains”.

That’s a third and fourth click.  Four clicks so far, but also requiring at least one more lucky guess on your part.

Now type in the first few characters of your docket number.

Now recall the verb that we have been using.  The verb is “search”.  So naturally what you or anybody else would do is look for the word “search” somewhere on the screen.  Nope.  Okay eventually you realize there is only one clickable thing left, so you might as well click it.  “Filter”.

The mousing and clicking and guessing and finding an Easter egg add up to it being oh I don’t know maybe ten times harder than doing the exact same thing in PAIR.   And sometimes also some scrolling is needed to go and look at stuff that is off the edge of the screen.

« If only the Patentcenter developers had looked at ePCT
What is an “Easter Egg”? »

3 thoughts on “How do you search by attorney docket number in Patentcenter?”